Thanks for contacting us. We've received your submission.

1 De Niro struggling to keep up with wife’s ‘thirst for Stella McCartney’: divorce lawyer 2 FedEx shooter — who massacred 8 in Indy bloodbath — ID'd as 19-year-old former... 3 Madison LeCroy wishes Alex Rodriguez and Jennifer Lopez 'the best' in split 4 Mom says she drowned her three kids 'softly' while she hugged, kissed them 5 Man accidentally gets one Moderna and one Pfizer COVID vaccine 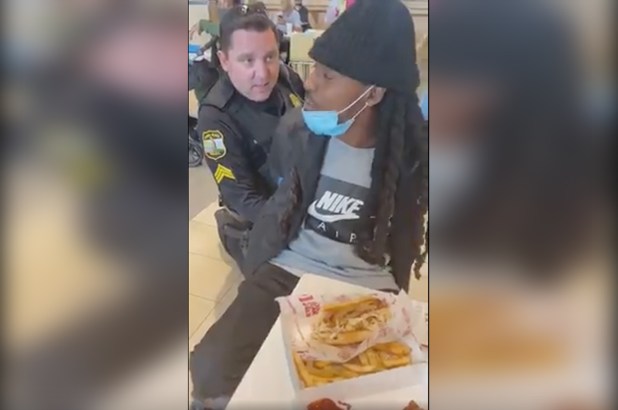 A black man who was wrongfully arrested by a maskless police officer at a Virginia mall has tested positive for the coronavirus, according to his fiancée.

Jamar Mackey tested positive for the virus on Christmas Eve, nearly a week after the incident, Shantel Covil told WAVY.

She said Mackey was quarantining at home with mild symptoms that include a low grade fever, a cough, and a sore throat.

Covil recorded the incident showing a cop arresting Mackey for alleged credit card theft while he was eating lunch with his family at Lynnhaven Mall in Virginia Beach on Dec. 19.

“You’re doing this in public? We can’t walk outside? In front of my family?” an angry Mackey can be heard telling the cop.

“Listen, I’m going to explain all of this,” replies the officer, who can be seen without a face mask.

“What did he do?” Covil says behind the camera.

The officer can be seen escorting Mackey outside where he insisted cops release him.

The Virginia Beach Police Department has since apologized to Mackey for the incident and said a different man was arrested in connection with the credit card fraud.

Covil told WAVY her fiancé took a COVID test on Dec. 22 as a precaution and his results came back positive two days later. She tested negative and is monitoring their two children, a 13-year-old and an infant. It’s unclear where Mackey contracted the virus.

The department also addressed the maskless officer during a press conference on Dec. 21 saying officers are required to wear face coverings.